THE MOST POPULAR INSTRUMENT

Chances are, if you look around your house, a relative’s house or your friend’s house, you’re bound to see a piano.  As a mater of fact, more people play the piano than any other musical instrument, making it ‘The Most Popular Instrument’.

Though the piano is the most popular instrument, very few people know of the history or the technical craftsmanship in the manufacture of this unique instrument.

The predecessors to the piano were harpsichords, clavichords, virginals and dulcimers, just to name a few. The first piano was built around 300 years ago, in 1709, by an Italian named ‘Cristofori, whom named the instrument ‘Gravicembalo col piano e forte’ ( meaning harpsichord with soft – loud ) which was shortened to ‘Pianoforte’ and later to just ‘Piano’. This piano had most everything a modern piano has, wire strings, keys, hammers, soundboard, bridges and dampers. The most important achievement of Cristfori was the escapement mechanical action. An ingenious device that permits the hammer, after delivering it’s string a sharp blow, to drop back at once and leave the string to vibrate freely so long as the key is held down. While the mechanism has advanced drastically through the years, the principal is still Cristoforis’.

Very few advancements to the piano took place for 115 years, then an American Craftsmen named Babcock, in Boston was granted a patent on a complete iron frame, uniting the hitchpin at the back of the piano to the tuning pinblock at the front. This allowed the use of heavy gauge strings ( over 225 of them with a total tension of over 35,000 lbs. ), increasing the volume of the instrument dramatically. Now the piano could be heard along with the orchestra.

The next advancement soon followed, with the addition of felt to the hammer to increase the dynamic range ( the ability to go from soft to loud ) of the piano. The felted hammer head was invented in 1826 by Henry Pape, whom also crossed the bass strings diagonally over the treble strings, giving them additional length in smaller pianos.

In 1821, a man named Erard perfected the double escapement mechanism for the action which added a backcheck to improve repetition ( makes the action repeat faster ). After that, between the years 1825 and 1851 over 1,100 patents were granted, mostly in England and France, on improvements to the piano.

By about 1850 the evolution of the modern piano was all but complete. Identical parts could be made via The Industrial Revolution, so prices slid down and more people could enjoy their own piano. Shortly after the turn of the twentieth century, piano sales hit an all time high in America with over 300,000 pianos sold in one year.

Most companies settled into a standardized action by about 1870. Another huge step forward was the invention of The Upright Piano, which arrived around 1860. The Upright piano used the same stringing design as The Grand Piano, but ran the strings up the wall instead of away from the player. The task in making this design work was achieved using springs instead of gravity to make the actions work.

Since around 1880, very little has changed in the design of the piano, except, usually, how to make them cheaper. Several excellent European piano manufacturers have made improvements in the sound and touch, but only small improvements over the way pianos were made in the old days, and an exuberant cost tagged on for the extra craftsmanship.

So what makes a good piano, and why do good pianos cost so much ? Simply put , materials and craftsmanship. Explaining how to build a quality piano is beyond the scope of this article, but the people assembling a quality piano are artists. Each piano they produce is an individual work of art.

Pianos fall into two main categories. Grand Pianos and Upright Pianos. Larger grand pianos and larger upright pianos usually will be better than smaller pianos, but if the craftsmanship of the larger instrument is poor, the smaller may play and sound better.

The sizes as well as the terms used to categorize the sizes of pianos varies from manufacturer to manufacturer, but here is a commonly used list for grand pianos :

To measure the length of a grand piano, measure from over the front of middle C key, to the furthest point away from the front.

Several manufacturers have made custom pianos larger than 9’2”, but 9 ft. is the usual length for a Concert Grand Piano.

For upright pianos, the sizes are

The Full Upright is also known as a Vertical Grand or a Cabinet Grand.

To measure the height of an upright, measure from the floor to the top of the piano.

The actions of uprights, as opposed to Grands, varies drastically between types, but there are three major types. The Full Upright action, which is found in the old uprights manufactured between 1870 and 1940, can still be found in some higher priced full uprights being made today. The Direct Blow, or Compact Action, similar to the Full Upright Action except with the Sticker removed, has become the dominant action used in most all upright pianos made since about 1950. The third style, The Drop Action, Indirect Action or also known as a Spinet Action, is found in small ( under 39” ) Spinet pianos made since the late 1930’s. The Spinet action, due to its inferior touch, is being fazed out of the manufacturing lines of most piano makers.

Generally speaking, the Grand Piano Action has the best action response and feel, the Upright Action is second and the Drop Action the least responsive. There are always exceptions to this rule, but the most important thing in the manufacture of a piano is craftsmanship. A qualified piano technician can best advise you before ever purchasing a piano.

People usually know that pianos need to be tuned from time to time, but there are a lot of misconceptions I’d like to clear up. First, a piano must be tuned weather it is played or not. It’s an expensive piece of furniture because it needs to be maintained. Not just when it is moved, but on a regular basis. Failure to keep it tuned can ruin the strings. How often a piano needs tuning differs drastically from piano to piano and from environment to environment as the temperature and humidity effect tuning stability. A qualified Piano Tuner – Technician can advise you on your situation, but a good rule of thumb is that your piano should be tuned and serviced once per year.

A key word here is serviced. Inside the piano are 6000 to 8000 parts. The parts of the piano action and keys have adjustment points, called regulation points, and need to be adjusted, or Regulated, from time to time. There are 6 to 8 regulation points on every key of an Upright piano action, and 10 to 13 regulation points on every key of a Grand Piano action. These points go out of regulation constantly, due to climate changes that effect the wood parts, and also wear due to playing. Now A Days, most pianos come out of the factory improperly regulated, and most warranties do not cover tunings, voicing or regulation. The word Voicing, deals with the firmness of the hammer felt. The average player, plays mostly in the middle of the piano, and mostly on the white keys, so the felt packs more on those hammers, making the tonal brightness uneven. Voicing, which evens out this tonal brightness, should be performed by your Tuner – Technician every time the piano is tuned.

Prices of new pianos currently range from approximately  $ 2000.00 to            $ 200,000.00 . Keep in mind that there are no federal agencies to protect you from buying a bad piano, no crash tests, no anti-lemon laws, so if you are thinking of buying a piano, please be an educated consumer and consult a qualified Tuner – Technician. A piano can give several lifetimes of enjoyment if it is properly manufactured and properly maintained.

In closing, I’d like to say thank you to the great artists like Mr. Steinway, Mr. Mason & Mr. Hamlin, Mr. Baldwin and so many other piano makers, all now gone, but not forgotten, and most of all to Mr. Cristofori, the inventor of The Most Popular Instrument. 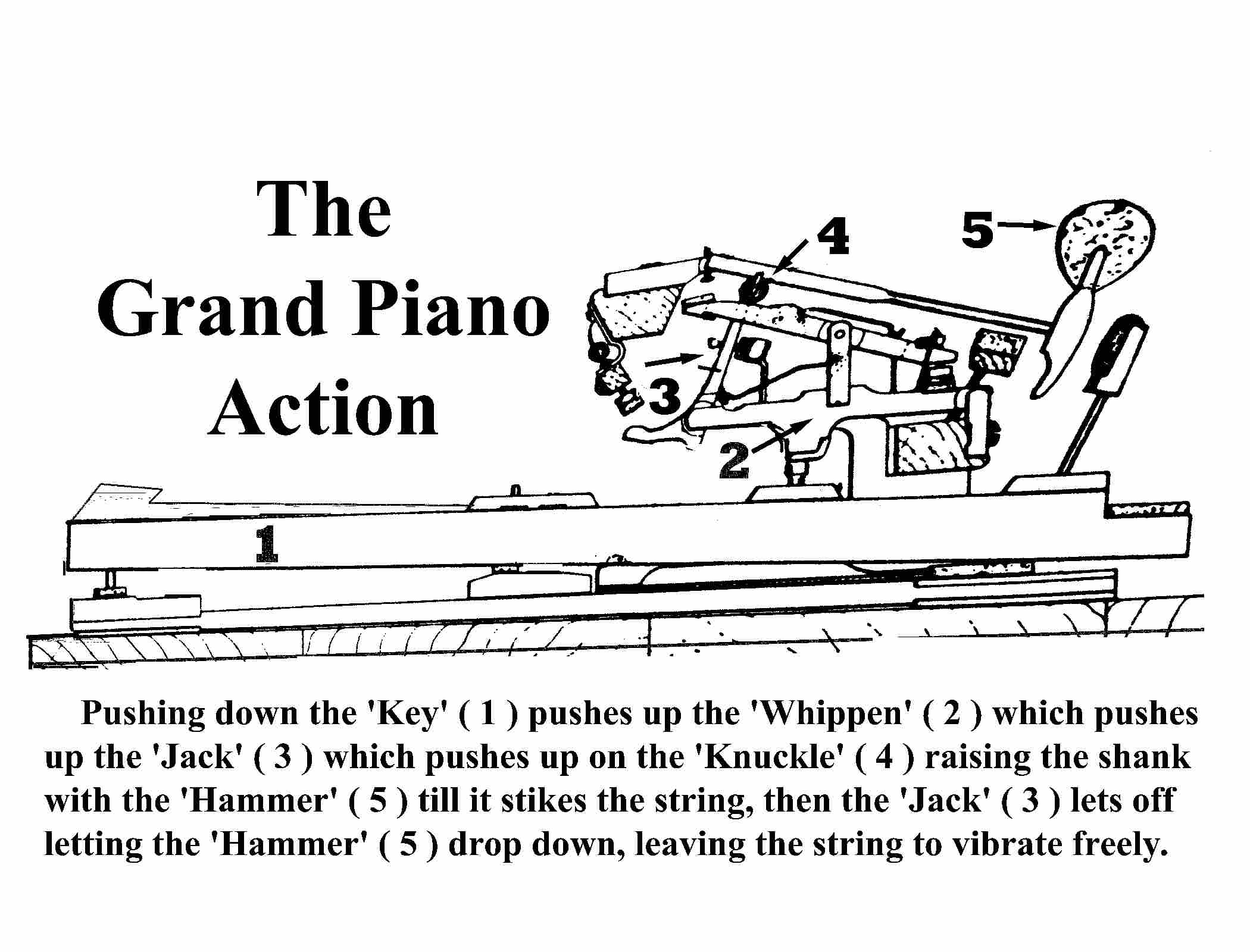 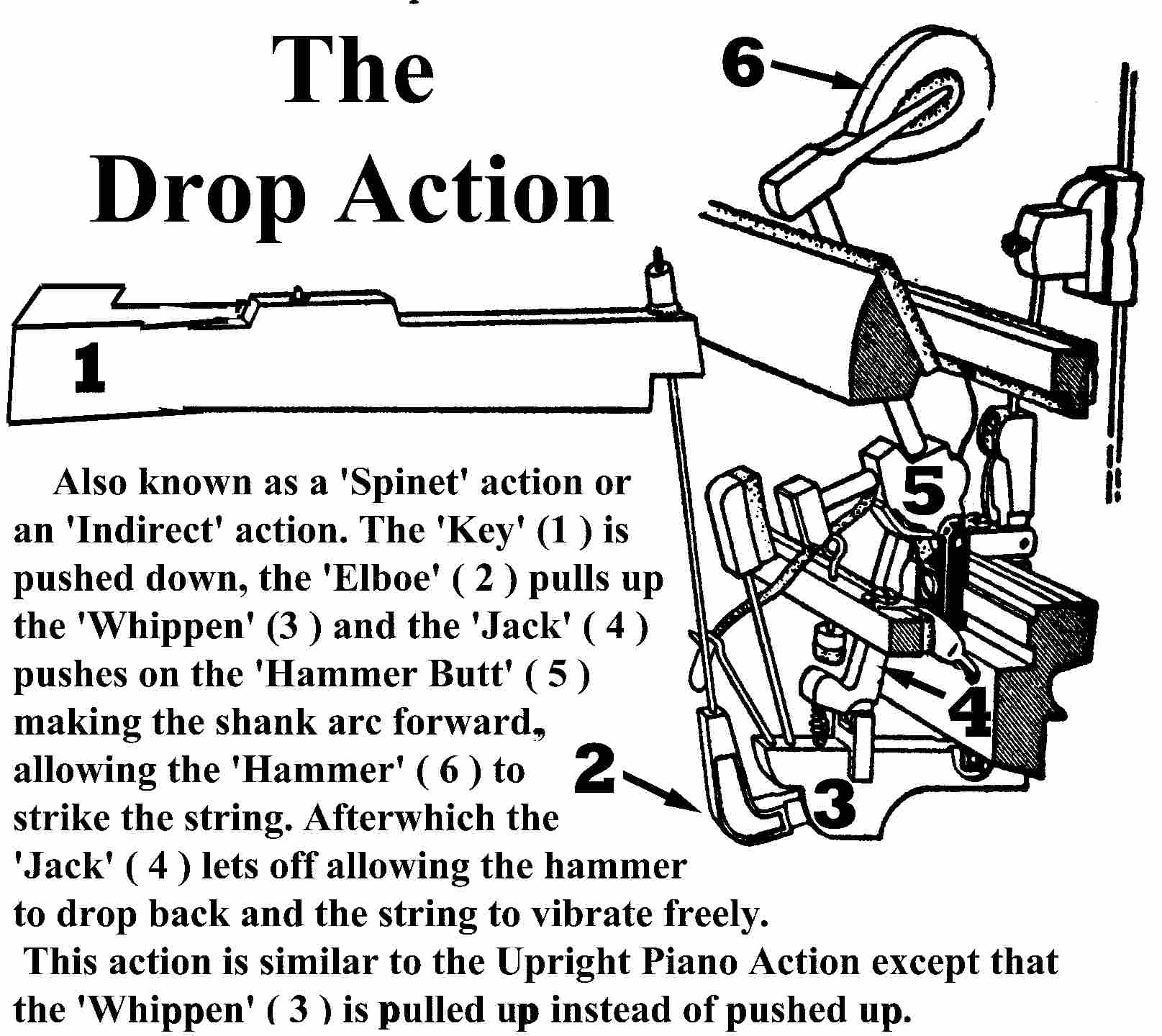